La Sierra: The Andes in Ecuador

Through the center of Ecuador, from north to south, from Colombia to Peru, you’ll find La Sierra. La Sierra is basically the Ecuadorian section of the Andes. Snow capped volcanoes, crater lakes, river rapids and historical cultural city centers are not what pops to most people’s minds when thinking of Ecuador. Nevertheless, you’ll find all that in La Sierra.

Ecuador is situated right at the equator. This brings a lot of sunlight and heat and has a major impact on the country’s nature. The Andes is characterized by high altitudes. The highest point in La Sierra is the top of the Chimborazo volcano at 6,300m. The elevation has the exact opposite effect on the Andean landscapes than the equator: it cools the climate down. The battle between these two Ecuadorian elements and the variance of the elevation through La Sierra results in interesting and diverse landscapes in the Ecuadorian Andes. You can swim under waterfalls in Mindo or hike through the snow on Cotopaxi. 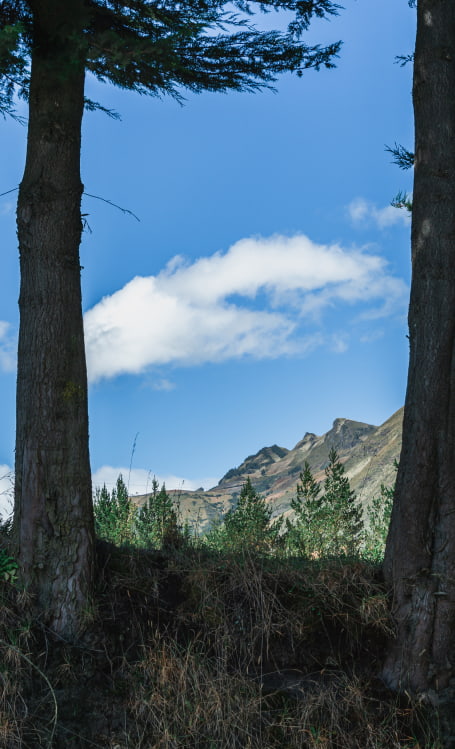 Ecuador has a total of 1,289 mountains of which 47 volcanoes. 15 of these volcanoes are in the Galapagos Islands, the other 32 are on the volcano belt which is the heart of the Ecuadorian Andes. Since the year 2000, there have been 5 eruptions in La Sierra. Sangay had an eruption in 2020 and Reventador has an ongoing eruption which started back in 2009.

The Chimborazo and the Cotopaxi are the 2 highest and most famous volcanoes of Ecuador. The panoramas are astonishing up there, especially on a clear day. At those altitudes, there is no vegetation, you’ll have snow under your feet and you can feel that there is less oxygen in the air. Roads go up rather high. Where the roads stop, the surroundings are already amazing. Climbing further to the top is possible, but only with a guide and if you are well trained.

In some areas in the Andes, groundwater is naturally heated by volcanic rocks deep underground. The heat pushes the water to the surface of the earth, resulting in some very enjoyable hot springs. Papallacta and Baños de Agua Santa are Ecuador’s most famous hot springs. However, Papallacta is at 3,300m and Baños at 1,800m, making the both, other than the hot springs, very different destinations.

From the central volcano belt in the Andes, you’ll descend when you go either east or west. If you go all the way west, you’ll reach the beaches at the Pacific Coast. If you go all the way east, you’ll end up in the Amazon Rainforest. In this case, we’ll only go halfway in both directions and stop at an elevation between 1,250 and 2,000m. We’ll find ourselves in Andean cloud forests, still within La Sierra.

The climate in the cloud forests is very pleasant. Temperatures are around 25 degrees Celsius and clouds and clear blue skies alternate. The nature is very green and it’s full of rivers, creeks and many waterfalls.

We already characterized Baños as a mountain town, but it’s in a cloud forest as well. The Napo river which originates at the Cotopaxi volcano crosses through. The rapids are very strong and ideal for rafting.

On the western side of La Sierra, you’ll find Mindo. The mountains are not as high as in Baños, making it perfect to tube down the calmer rivers. Mindo is known for its many birds. People come from everywhere for bird watching in Mindo. It has one the  world’s largest variety of species, including many endemic birds.

The Lake district in the highlands

We’ll go back deeper into the Andes, to the feet of the volcanoes and just north of Quito. We are in the highlands in the lake district now, at an elevation of between 2,000m and 2,500m. The weather is pleasant, in particular during the driest months from mid-May until mid-November. Temperatures are around 23 degrees Celsius year-round.

The landscapes in the highlands are hilly, grassy and with impressive panoramas. This area in La Sierra is suitable for long-distance hiking, cycling and horseback riding.

Most lakes in the highlands have formed inside of extinct volcanoes. The craters are lower than the surrounding volcano tops and had centuries to fill up with rainwater as if it were bathtubs. Quilotoa is Ecuador’s most famous crater lake and the climax of the multiday hike the ‘Quilotoa loop’. The Cuicocha, the Lago san Pablo and the Yawarkucha are less known to tourists, but also beautiful crater lakes and worth a visit.

In the highlands outside of the towns, you’ll find multiple haciendas and fincas, which basically are Ecuadorian ranches. Many of these transformed into hotels and some offer facilities for horseback riding.

Ecuadorian History and Culture in the Andes

A lot of what you see in La Sierra today, tells a story about Ecuador’s vibrant history.

Close to Cuenca, you’ll find the Ingapirca ruins. These archeological remains were once used by the Incas as an observatory for the sun, moon and stars.

Even in today’s society, you’ll still notice the heritage of the Incan culture. In particular in the rural areas. American indigenous communities still wear their colorful traditional clothing made of alpaca wool, such as ponchos. At the artisan markets of Otavalo and Cotacachi, locals sell plenty of their handmade high-quality artisan products.

In 1534 the Spanish completely rebuilt Quito back up. The year before, the Incas had burned it to the ground when they realized that they would be unable to defend the city against the Spanish conquistadores. Quito’s city center has been maintained in the same colonial style ever since. If you walk through the old town, you’ll truly feel as if you go centuries back in time.

With the Spanish conquistadores came the catholic missionaries. With centuries of Catholicism came an abundance of extravagant cathedrals. Today, Quito has the highest number of cathedrals per square meter in South-America.

What should your (adventurous) vacation or backpacking trip look like?

Check out what we can do for you!